you can read this article: wearing human hair wigs to change your look.

Geothermal resources in Kenya are located within the Rift Valley with an estimated potential of between 7,000 MW to 10,000 MW spread over 14 prospective sites. Geothermal has numerous advantages over other sources of power: it is not affected by drought and climatic variability; has the highest availability (capacity factor) at over 95 %; is green energy with no adverse effects on the environment; and is indigenous and readily available in Kenya, unlike most thermal energy that relies on imported fuel. This makes geothermal a very suitable source for baseload electricity generation in the country.

Sources of energy in the world are derived from either the direct effects of the sun’s activities or from the activities of the earth. Be it wind, solar photovoltaic, nuclear, hydro or fossil fuel energy, there is a direct involvement of the sun or the earth. Geothermal energy falls under the category of energy sources that are derived from the earth. As evidenced by the name, geothermal energy is the type of energy obtained from the heat that is found beneath the earth. This energy can be tapped from the earth in form of hot water or steam, at varying temperatures. Geothermal energy can only be harnessed from geothermal resources. These resources are reservoirs of hot water and steam, situated at varying depths below the earth surface. Geothermal energy can be used for generation of electricity, for district heating applications in cold countries and for thermal duty applications in industries. The geothermal sources are classified under green energy. When one megawatt hour of geothermal power is used to replace one megawatt hour of coal-fired power plant, there is an offset of approximately one ton of carbon dioxide gas emissions.

Status of the technology in Kenya

In Kenya, it is estimated that there is about 7000 to 10 000 megawatts (thermal) untapped geothermal energy beneath the Rift Valley region. This energy is thought to be located in fourteen prospective sites. These prospects have been divided, for administrative purposes, into north, south and central rift geothermal fields. The exploration of geothermal energy in Kenya began in 1957 by the Kenya Power and Lighting Company (KPLC). This was taken up by Kenya Electricity Generating Company (KenGen). Currently, the Geothermal Development Company (GDC) carries out the exploration of geothermal sources.

Until now, geothermal resource surface exploration and assessment has been undertaken in a number of fields including; Menengai, Baringo-Silali, Suswa, Mwananyamala, Homa Hills, Barrier, Nyambene Hills and Chyulu hills. Further to this, Olkaria, Menengai and Baringo-Silali wells have been drilled with fifty-nine (59) geothermal production wells successfully developed in Olkaria geothermal field. Drilling at Menengai and Baringo-Silali is in progress with a cumulative of fifty-one (51) geothermal wells drilled and approximately 170 MWe equivalent of steam already identified for power generation.

Table: Fields identified and their status of development 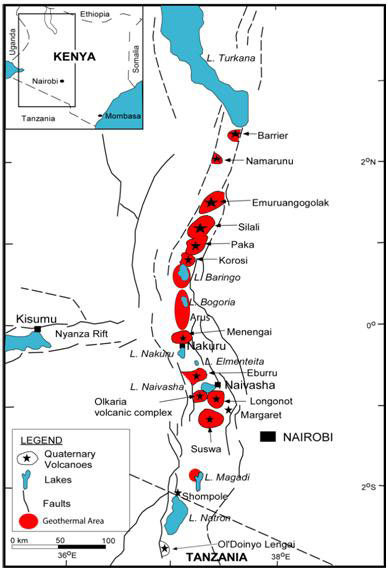 Development of geothermal energy facilities is governed by the Energy Act ( 2019) among other laws. The interested investor has to clear with the Energy and Petroleum Regulatory Authority, Kenya Power, Kenya Forest Service, County Government and Ministry of Energy. The clearance information is located at the websites of the respective bodies.

EPRA's Renewable Energy Portal uses cookies to ensure you get the best experience.

EPRA's Renewable Energy Portal uses cookies to ensure you get the best experience.